OES and the Social Security Administration (SSA) worked together to address improper payments by developing and testing reminder notices to Supplemental Security Income (SSI) recipients in order to increase timely wage reporting. Based on the increase in the amount of wages reported, a cost-benefit analysis suggests that the letters generated a reduction in overpayments of approximately $9.44 per $1 spent by SSA.

This study tested whether a behaviorally-informed letter would encourage SSI recipients to report any changes to their earnings in a more accurate and timely manner. Fifty thousand SSI recipients who were between 18 and 50 years of age, had no earnings, and were deemed by SSA as more likely to experience changes in their earnings were randomly assigned to either a no-letter control group or one of four treatment conditions: 1. A basic letter with simple language about the need to report any information about earnings that might affect SSI payment amounts 2. A social information letter that provided individuals with information about the actions or decisions of others 3. A penalty salience letter that included additional language on the possible penalties from failure to report 4. A combination letter which included both behavioral components. Three months after the intervention, SSI recipients who received any letter were 34 percent more likely to have reported any earnings for the previous three months, and they reported about 75 percent more in earnings. 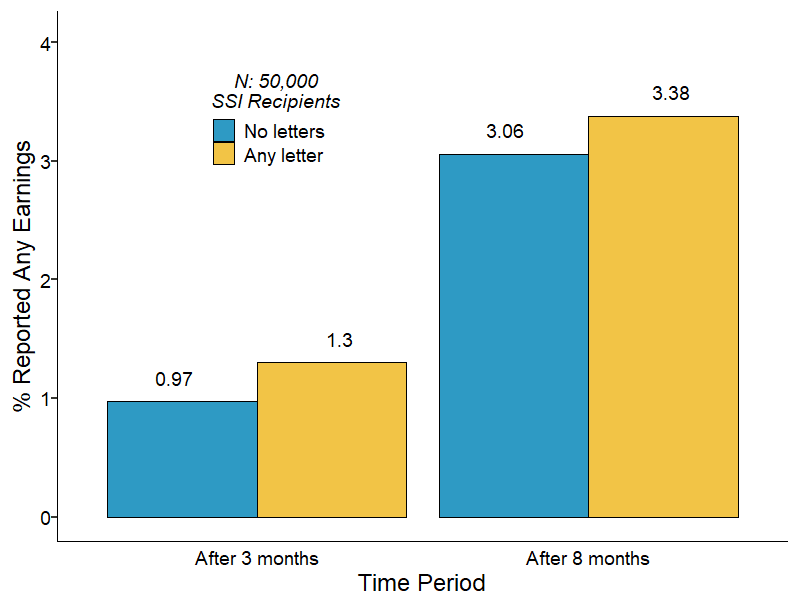 Taking on this type of evidence-building project to meet a specific agency goal—reducing improper payments demonstrates the Agency’s commitment to being a good steward of the programs it administers. SSA plans to build on this experience in at least two ways: First, by making further improvements to the letters by highlighting other important reporting responsibilities. Second, by improving the target efficiency of the notice using administrative data and the results of this evaluation.

Once SSA has refined the letters, they will develop a proposal to send the letters to the entire target population on a regular basis.

This project was presented at the 2019 Annual Event. See the recording and presentation slides here.