A 2020 paper in the Journal of Public Economics highlights successful outcomes generated by OES over a two-year period.

Some Servicemembers were not automatically enrolled at the time of the intervention, and many have insufficient retirement savings.

In January 2016, nearly 700,000 Servicemembers from the Army, Navy, Air Force, and Marine Corps were not yet enrolled in TSP. They were randomly assigned to one of 10 groups: a no-email control group, an email that listed the action steps needed to enroll in TSP and emphasized the potential long term benefits of saving even a little each month, or one of eight emails with a suggested contribution rate. The eight different suggested contribution rate emails added a statement that many Servicemembers start contributing at a specific rate, which ranged from 1% to 8%. One month later, 1.94% of those in the no-email group had enrolled in TSP, compared to 2.58% who received the basic email and 2.73% of those who received an email with a suggested contribution rate. 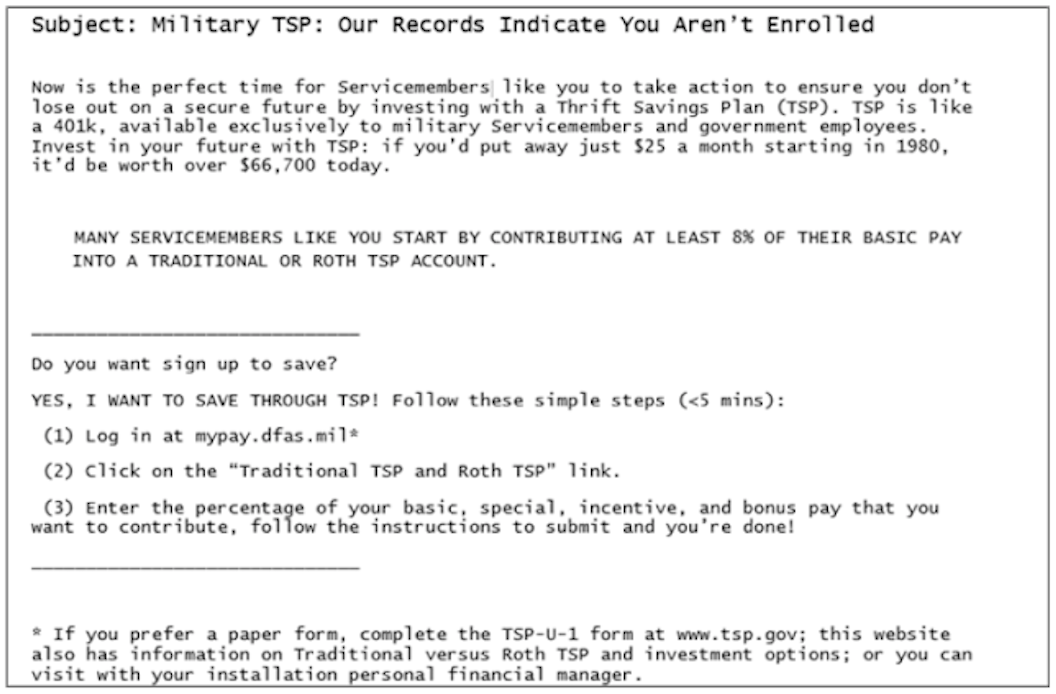 The authors of the 2020 paper used two years of Defense Finance and Accounting Service (DFAS) payroll data to see whether the initial increase in enrollment lasted among the 300,000 participants who were active-duty Army Servicemembers. About 13% of those who had been in the no-email control condition were enrolled in the TSP two years later. Authors compared this group to those who had been sent an email, using a statistical analysis that adjusted for factors like age and marital status which might affect the probability of participating in the TSP. In this analysis, having been sent the baseline email increased the rate of enrollment in the TSP by 0.36 percentage points, and having been sent a specific rate email increased it by 0.61 percentage points. The specific rate emails created more than $9 million of additional retirement savings over the 2-year period.

The lasting difference after two years suggests that the emails did not just speed up enrollments that would have happened anyway. The authors also found no evidence that Servicemembers who received emails enrolled but then dropped out.

There was clear willingness to contribute more than 3% of monthly pay. In fact, as of October 1, 2020, the Federal Retirement Thrift Investment Board (the government board that administers the TSP) increased the default contribution rate for new enrollers in TSP from 3% to 5%. That increase is consistent with the 2016 and longer-term findings that suggesting a higher contribution rate can boost retirement savings.

The full portfolio of OES work on retirement savings can be seen here.