As part of the American Rescue Plan (ARP), the Department of the Treasury (“Treasury”) is administering the State and Local Fiscal Recovery Funds program (SLFRF), which provides $350 billion in funding for eligible state, local, territorial, and Tribal governments to support their response to and recovery from the COVID-19 public health emergency. Approximately 27,000 small cities and towns – referred to as non-entitlement units (NEUs) of local government – were allocated $19.5 billion of this funding.¹

NEUs must submit their Project & Expenditure reports (“spending reports”) on Treasury’s American Rescue Plan (ARP) Reporting and Compliance Portal. Treasury seeks to support NEUs to meet their reporting requirements in order to promote transparency, responsibility, and equity in the use of funds.

A major question for Treasury is how to best incentivize NEUs to comply with reporting requirements, given the sheer number of NEUs and their infrequent contact with federal agencies. OES partnered with Treasury to test whether messages that encourage NEUs to conform to peers’ behaviors or provide information on the time costs of submission can influence them to submit reports in a more timely manner. These messages were easily incorporated into Treasury’s planned communications and have the potential to prevent the need to follow up with NEUs who did not submit on time.

The Office of Evaluation Sciences (OES) and Treasury collaborated in redesigning emails that encourage timely submission of spending reports. OES tested two email changes against the business-as-usual version: 1) including a peer comparison; and 2) including information on how submitting is quick and easy. The peer comparison message noted that 97% of SLFRF recipients with a prior reporting deadline submitted their reports on time. The quick and easy message stated that submitting should take less than 30 minutes and that there are resources available to help recipients. 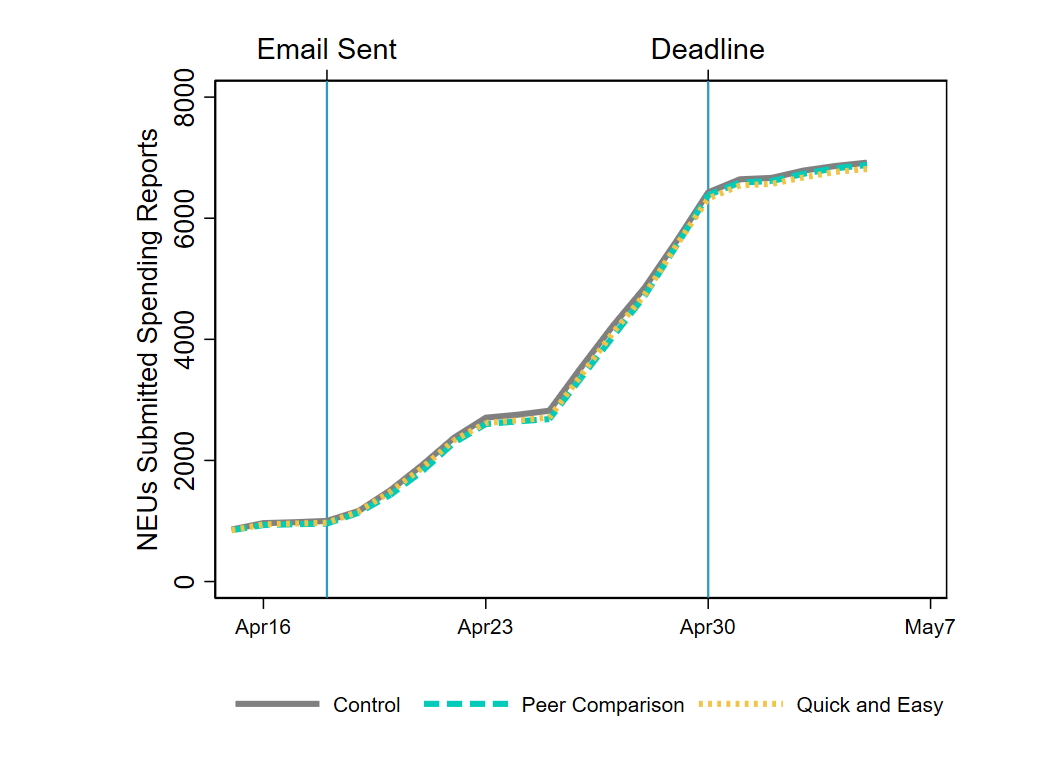 Future work can investigate why the messaging treatments were not effective in getting recipients to submit their spending reports and caused recipients to delay submission.

To verify the upload date of our analysis plan click here..