Between 2014 and 2017, the individual mandate provision of the Affordable Care Act required most individuals to have a minimum level of health insurance coverage or to pay a penalty when filing taxes. About 8 million families paid an average tax penalty of $210 for lack of coverage in 2014, the first year the provision was implemented.

During the open-enrollment period for 2017 health insurance coverage, the Internal Revenue Service (IRS) sent informational letters to households who owed a positive tax penalty under the individual mandate for the 2015 tax year and appeared eligible for health insurance. The letters included information about coverage options, details on how to apply, and possible ways to enroll. 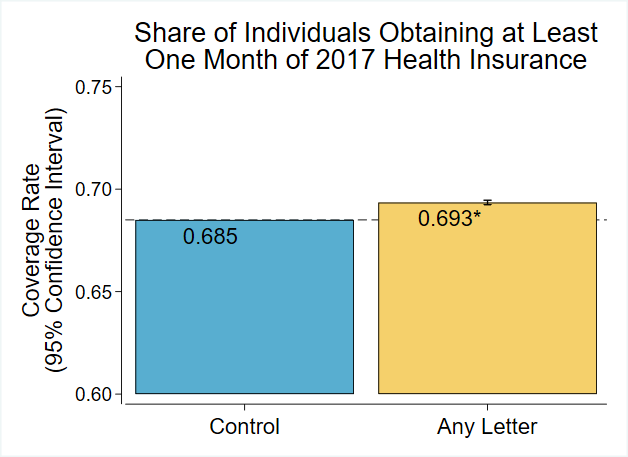 Receiving any letter increased the probability of an individual obtaining at least one month of 2017 health insurance coverage by 0.85 percentage points. This represents a 1.24% increase relative to 68.5% coverage among individuals in households that did not receive a letter. The most effective letter was the one sent early in the open-enrollment period which also included a personalized estimate; this letter led to a 1.19 percentage point increase in enrollment.

This project was designed and fielded before OES formalized the OES Evaluation Policy and standardized the six steps we now use to ensure our findings are relevant and reliable.